Ruth Murunde¹, Henry Wainwright² and Losenge Turoop¹
¹Dept. of Horticulture, Jomo Kenyatta University of Agriculture and Technology, Nairobi, Kenya.
²Real IPM Company Ltd. Madaraka, Thika, Kenya.
Abstract
In three separate greenhouse experiments we evaluated the effect of different densities of the mites Amblyseius montdorensis (foliar predator; AM at 0, 5, 10 or 15 per pot), different densities of Hypoaspis sclerotarsa (ground predator; HS at 0. 50, 100 or 150 per pot) or a combination of the two (0AM, 0HS; 15AM, 50HS; 15AM, 100HS; 15AM, 150HS) on emergence of western flower thrips (WFT), Frankliniella occidentalis Pergande (Thysanoptera: Thripidae) from soil; initial start populations of WFT were either small (10) or large (20). A completely randomized design was used and for each experiment there were three replicates per treatment and the experiment was repeated on two occasions. Single applications of A. montdorensis, H. sclerotarsa or a combination of both all had an impact on the number of WFT emerging compared with the control. There was a significant effect of A. montdorensis density on the number of WFT emerging from the soil (F=0.31, P= 0.420 df =1). There was no significant difference in the population densities of WFT emerging from soil in the control and following release of H. sclerotarsa when initial release densities of WFT at the two initial prey densities of 10 and 20. Combined use of A. montdorensis and H. sclerotarsa at a density of 150 with 15 A. montdorensis reduced adult WFT emergence at density of 20 WFT. These findings highlight the potential for a combined use of A. montdorensis with H. sclerotarsa for the control of soil-dwelling stages of thrips. 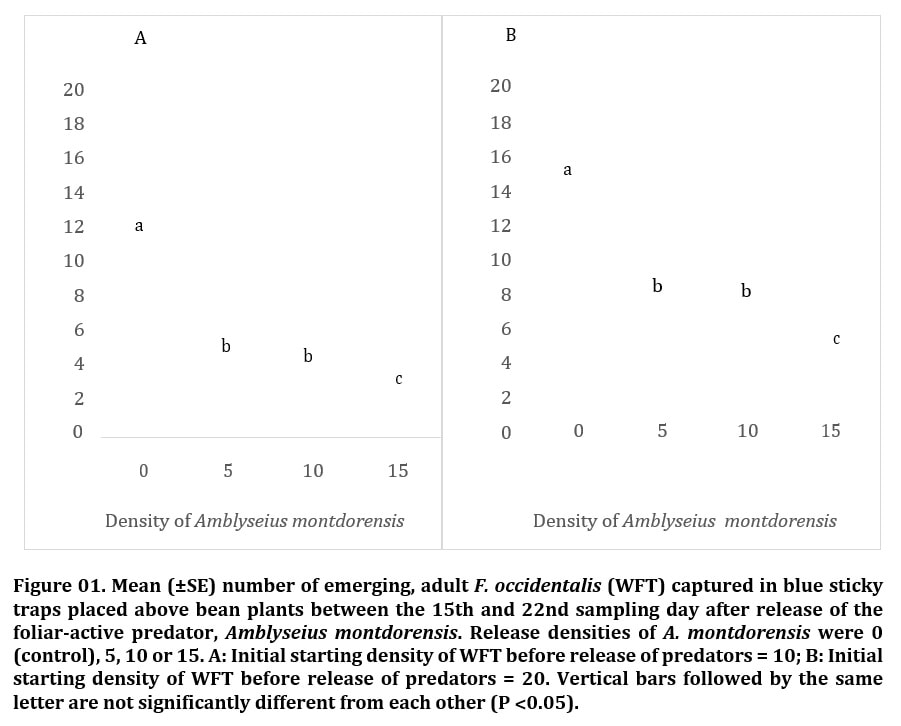 © 2018 The Authors. This article is freely available for anyone to read, share, download, print, permitted for unrestricted use and build upon, provided that the original author(s) and publisher are given due credit. All Published articles are distributed under the Creative Commons Attribution 4.0 International License.
​Require any changes or update in this article? Please contact from HERE.
Journal of Molecular Studies and Medicine Research EISSN 2414-5009.